For years, I worked as both a teacher and doing sales at this great little guitar shop in Atlanta called Boutique Guitar Exchange.  Since YRR's schedule kicked into a higher gear, I had to scale back my involvement since I couldn't commit the time.  HOWEVER, in the last few months the opportunity to buy into the store was made available to myself and two other partners, and as of last month, we became the new proprietors!  Matt Chenoweth (who I had worked with at Daddy's Junky Music when I lived in Boston) and an unnamed 3rd party pooled our resources and purchased the store from Michelle Speert who founded the store 10 years ago.   My gig schedule is still pretty nuts, but I work the store as much as my schedule will allow.  If you dig high-end guitars, amps and pedals...or even if you just like lookin' at 'em...check us out!

I recently recorded some tracks for these insane animations for two new pedals from Fender aimed at Hard Rock/Metal Guitarists.  This is a collaboration between myself, Fender, Hey Beautiful Jerk (video production/animation), Art of Skinner (character design), and fellow YRR member Nick Niespodziani.

Chick Halston "In My Room"

Also in the news...My new project with Chris Cox "Chik Halston" will be debuting in the Atlanta Room at Smith's Olde Bar Friday September 6th.    I will be posting some of the tracks we recorded with Bruce Butkovich at Open Sky Studios soon. Check out the link for the gig here: 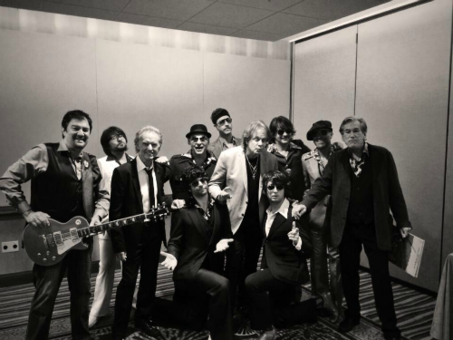 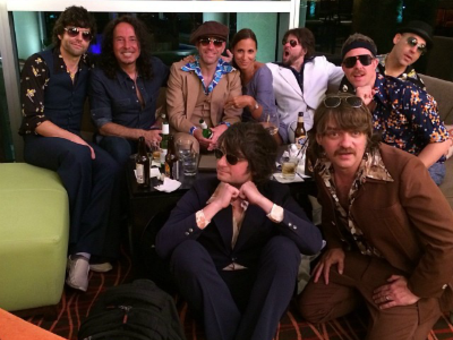 when it was new, so I have literally been hearing it almost all my life.  it's a bit challenging to solo over, so I spent some serious time working with it the last couple of weeks.  Below is a practice video I captured after I finally started getting the hang of it.  I don't think Dias, Herrington and Krantz are going to be quaking in their boots over my version, but it's a start!

We have quite a few more dates for the Yacht Rock Revival tour coming up in July.  Will post them soon! 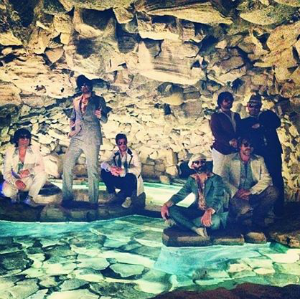 Big thanks to my long time friend Derek Brooks and Ernie Ball Strings for welcoming me into the family!  I have used Ernie Ball strings just about for as long as I have been playing (The Titanium Coated .009s being my current favorite), and have played an Ernie Ball/Music Man Silhouette guitar since 1991!  Visit them at  www.ernieball.com.​

At the Gates of Versailles

​Also in May, YRR played a huge corporate gig in Orlando where we once again backed up Gary Wright, Jeff Carlisi from 38 Special and Chicago's Bill Champlin.  We also played with former Journey frontman Steve Augeri and Eddie Money!  There's a few hits between all those guys, don't ya think?  Check out the audio for the songs below.  I am still tweaking out my Kemper, but I think these sound pretty good.

Congrats to Mark Szuminski and Gina Niespodziani, collectively known as "Hey Beautiful Jerk" for getting their haunting short film inspired by the classic Santo and Johnny tune "Sleepwalk" into the LA Short Film Festival in September!

Of course, as awesome as it is for THEM, this is MY website and being the self centered bastard that I am...I do have a connection to this whole affair!  Because of of licensing reasons, they needed to re-record the track, so Gina's brother Nick (from YRR) assembled myself on Lap Steel, Mark Cobb (also from YRR) on drums, Rob Henson (a sometime member of of YRR and former bassist for Corey Smith) on upright with Nick handling production chores and playing second guitar.  We do a pretty spot on version, with a few little liberties thrown in to heighten the drama of the animation.

​LISTEN TO MY INTERVIEW

This Saturday 6/8, The Greater Vavoom will be opening the show for the Georgia Music Awards. Unfortunately, I already have a commitment that night with YRR.  Chris will be using guitarist Matt Chenoweth subbing for me, as well as Bruce Butkovich on Bass and Reggie Rogers on Drums.  Hopefully, this will lead to some other cool gigs in the near future.

YRR just returned from a short midwestern run including a packed House Of Blues Chicago and a sold out show at Radio Radio in Indianapolis.  We also played a private gig for Firestone Tires that resulted in all of us getting to go to the Indy 500 race!  What a cool experience! 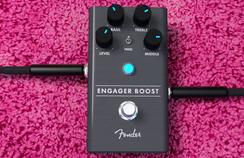 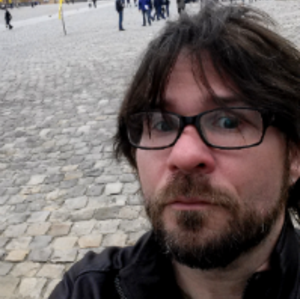 Anyway, Mid 2014 to present.  YRR has been busier than ever.  We have expanded our reach to markets in Indy, Chicago and Boston.  All have been doing well for us.  We continued to hit the high seas, courtesy of Sixthman, with the Grammy sponsored "Women Who Rock" cruise (where we were joined onstage by bassist Dan Rothchild and drummer Ben Smith from Heart playing "Rosanna"! ).  Train took us out on the "Sail Across the Sun" Cruise once again.  Home Depot brought us back for their annual "Stars" convention at Mandalay Bay.  We traveled to Honolulu, Hawaii for the Lions Club International Convention where we opened for Yacht Rock royalty Kenny Loggins.  We were the house band that backed up both Journey singer Steve Augeri and Starship's Mickey Thomas.  Our 5th Annual Yacht Rock Revival sold out at Piedmont Park, and along with our old friends (Walter Egan, Player, Jeff Carlisi, Steve Augeri, Elliot Lurie and Robbie Dupree)...We welcomed singer/songwriter/producer Matthew "Break My Stride" Wilder for his first live performances in almost 30 years (He killed it, BTW!)!  Nick and Pete finally opened the much anticipated restaurant/live music venue "Venkman's" to universal acclaim.

Personally, Chris and I are still finishing up the Chick Halston material.  I am also working on a mostly Orchestral album that is probably light years away from what people might expect from me. The "Alien Sim-Phony" is just a working title. It uses some deep space sounds from the NASA website and I just took it from there. The other stuff I am working on in this general vein is way more ambitious than this.  Here are some previews:

I helped out with some harmonies and (along with the YRR guys) some big ol' gang vocals on one track on the upcoming Skid Row disc.  Back in '06, I filled in for guitarist Snake Sabo briefly, which was a great experience! Release date is TBA, and you can get all the details at the Skid Row Official Website.

It's been quite the eventful 2014.  YRR spent the Xmas holidays in the LA area playing shows at The Hollywood House of Blues (and we were joined by our old buddies Elliot Lurie from Looking Glass, Peter Beckett and Ronn Moss from Player...and our new buddy Al Stewart...We did "Year of the Cat" and it was killer! Check out the video HERE), 2 shows at the Rose Bowl for both the New Years Day Bowl Game and the BCS, NYE at the Long Beach Pier, and the freakin' Playboy Mansion!

Gettin' Blotto in the Grotto at the Playboy Mansion!

February and March saw us hitting the high seas for the Train "Sail to the Sun" Cruise and the Sixthman "Live Loud" Cruise.  We got to hang out with the guys in Train, guitarist extraordinaire Charlie Hunter, 120 Minutes' host Matt Pinfiled and John Oates!  Check out the video of us playing "Rich Girl" with him on the Pool Deck HERE.  This is one of the first full gigs I did with the Kemper Profiler, so my sound is a little too gain-y in the intro.  In Mid March we hit Nashville, Indianapolis, a bitter cold Chicago, Las Vegas, NYC and Costa Rica.  Between the temperature changes and the crazy travel schedule, I got sick as hell!  It took me about a month to rebound from that little ordeal.

The Vegas shows were for The Home Depot Stars show.  Basically, Home Depot employees from around the US competed in an American Idol type singing contest.  The winners were flown to Vegas and performed with us backing them at Mandalay Bay arena for the convention that was taking place.   We worked with some really top notch people from the performers to the crew.  A great experience.

In April, we stayed in town for the most part playing our usual club and private events.  My original band "The Greater Vavoom" got to play for the first time in about a year and a half, and it was good to play some of my own music for a change.

I had time to take a quick little non musical vacation at the end of May to France, which is always exciting.  In addition to visiting Paris, I got a chance to spend some time in Versailles for a couple of days.  That was truly something to behold...Absolute power is certainly oppressive, but damn...it gets shit done!

Nice little feature in the December Issue of Performer Magazine.  "5 Minutes with Mark Dannells" That's about 4 minutes longer than most people can stand...But thanks to Lesley Daunt for putting up with me!

​Link to the online issue, check out page 6 to see the full article!

YRR is gearing up for our biggest spring/summer ever!  Last Saturday we opened up for Muse,  Macklemore and Ryan Lewis, Ludacris and Flo Rida for the Centennial Park Final Four Concert Series in front of over 30,000 people.  We are also starting to announce US tour dates for shows where we will be joined by bonafide Yacht Rockers such as: Bobby Kimball (Toto), Walter Egan, Robbie Dupree, Peter Beckett...and more!  Guest artists will vary from date to date, so check the appropriate venue's website for more details.  The following two have been officially announced:

I have also been busy in the studio working with some new artists (TBA), and Chick Halston-a new original project from my Warm Gunns/ Greater Vavoom collaborator Chris "Shangri La" Cox.  It definitely has a different vibe than any of our previous projects, and we hope to have it out sometime this summer!

...And they couldn't be more different!

2nd - "Lady Silence" from my BAPHOMETAL band The Burned Over.  This is a collaboration with former GWAR vocalist Kim "Vulvatron" Dylla, and we will release our first Full Length The Last Great Awakening in Late Spring 2020

This past weekend YRR played in Athens at the great Georgia Theater on Friday and debuted a version of our annual Yacht Rock Revival at the Cannery.  It was originally slated to be an outdoor festival, but the fickle Nashville weather had other plans.  Once again we were joined by the likes of Walter Egan, Peter Beckett, Robbie Dupree and John Ford Coley playing all their big hits.  This year we were able to bring in the legendary voice of TOTO, Bobby Kimball to our smooth alliance.  It was great hearing his voice over classics like Rosanna, Africa and Hold the Line. His mini-set also included a version of one of my favorite Steely Dan songs "Bodhisattva", which Toto would cover from time to time.  My brother bought the album this song was on (Countdown to Ecstasy) 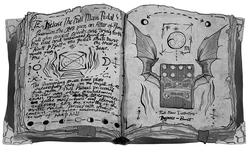 One of my longtime songwriting partners Elizabeth Elkins is releasing one EP a month for the first 3 months of 2013 from her band The Swear.  I mixed and assisted on some vocal arrangements for this musical trilogy that has it's roots steeped in classic alternative hard rock/post punk.  "Gold" and "Hymns" are already available with "Hell" coming out March 1st.  For more info check out The Swear's Official Website.