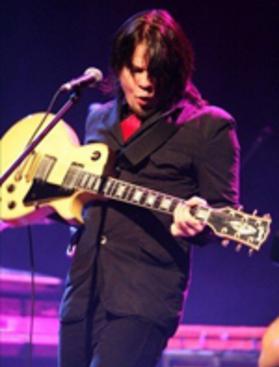 Born in Northern New Jersey, and further corrupted in the Billy Joel immortalized city of Allentown, PA, Composer/guitarist Mark Dannells was drawn to music as far back as he can remember.  After playing in several local bands in high school,  his quest to make this profession his life long career led him to study at the prestigious Berklee College of Music in Boston. Post graduation, he joined several touring bands that performed thousands of dates over the next several years. His playing eventually received national attention and he was invited to audition for such acts as Nine Inch Nails, Marilyn Manson, Red Hot Chili Peppers and Kenny Wayne Shepherd.

Mark, along with his bandmates in Blacklight Posterboys and Fox 5 Creative Services director John Kukla, were presented with an EMMY in the spring of 2000.  The award was for the song "Have A Nice May" that Mark co-wrote and produced that was used by the Atlanta Fox affiliate to promote their May sweeps week.

Currently residing in Atlanta, Georgia, Mark performs constantly with various incarnations of the the PleaseRock music collective, including the ever popular Yacht Rock Revue. In addition to their sold out headlining shows across the US, they have acted as a back up band for artists such as Eddie Money, Rick Derringer, Bobby Kimball (Toto), Mickey Thomas (Starship), Steve Augeri (Journey), Matthew "Break My Stride" Wilder, Gary "Dreamweaver" Wright, Robbie "Steal Away" Dupree, Peter Beckett and Ron Moss (Player) and Walter "Magnet and Steel" Egan. He is also involved with production and composition for various artists, and has worked with the companies  Placement Music and Audiosocket to produce music for such shows as Anthony Bourdain's "The Layover' and Drop Dead Diva.

​
For a more in depth performance bio, please read the following:

Official Video for "Baby" by The Bloody Wolves of Venice

Touring and Recording Guitarist
Guitarist for several groups under the PleaseRock Music Collective.
Including:

Live Guitarist
Backing up British singer for his Atlanta residency prior to his debut release on Keifer Sutherland's Ironworks Records.
Jim Stapley on Ironworks website

Live and Recording Guitarist
Popular Atlanta Based Indie Americana/Soul/Pop act.  Chosen as one of Rolling Stone Magazine's "25 Best Bands on Myspace" in 2006.

Live Guitarist
Part-time guitarist for live Karaoke band with 300+ songlist.  Called “The  Thunderdome  of Karaoke.” by Rolling Stone  and “One of America's Wildest Parties." by Spin Magazine.
Metalsome Inc at Metalsome Promotions

Touring and Recording Guitarist
Live dates with Alabama based singer/songwriter on his 2003 Southeastern Tour.  Appeared on his 2007 Paradyne release "How Love Goes".

Guitarist/Producer/Writer
Popular Atlanta based band. Released 2 Indie CDs "BLPB" (1998) & "Psychotic Love Songs" (2000). Also featured on "Roadrash:Jailbreak" video game, and the song "If The Animals Could Talk" was voted best song on its soundtrack by thousands of gamers worldwide.
Blacklight Posterboys on myspace